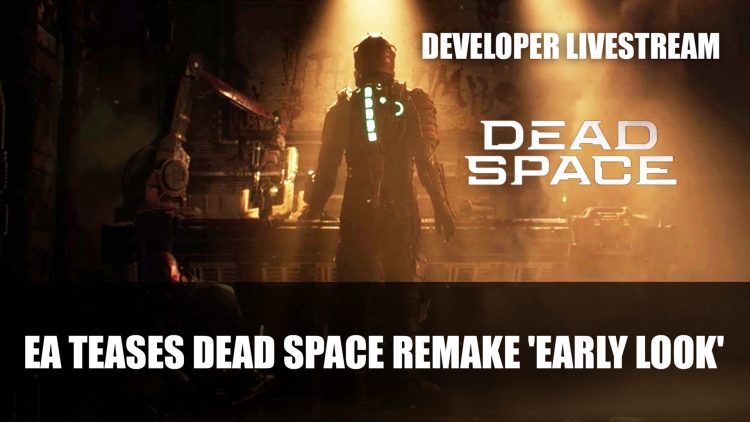 Electronic Arts have teased they will be revealing an ‘early look’ of the Dead Space remake during the next livestream.

Electronic Arts and developer Motive Studio will be giving Dead Space fans a “very early look” on Tuesday about the development of the game. The sneak peak will be livestreamed on the Motive’s Twitch channel on August 31st at 1 PM EDT/10 AM PDT.

As to how much and what we’ll see during the stream, a “very early look at the development” doesn’t give too much away. EA and Motive have not confirmed whether it will be a trailer or gameplay. So far there has been no release date of the Dead Space remake either.

The passionate team at @MotiveStudio are bringing you in for a very early look at the development of #DeadSpace.

Previously EA and Motive announced the Dead Space remake in July which promises a built-from-the-ground-up, but will stay faithful to the 2008 original. The remake will involve all-new assets, new character models and environments.

We can’t wait. See you there! pic.twitter.com/HgBPMUTbM3

The Dead Space series has three main games launched between 2008 and 2013. The franchise also gained a few spin-offs including the puzzle-action game Dead Space Ignition and the rail shooter Dead Space Extractions. The main entries of the series are based on the 26th century featuring Isaac Clarke who fights undead beings known as Necromorphs.

For more news be sure to check out next Black Geyser: Couriers Of Darkness Has Now Entered Early Access and Chernobylite Gets ‘Tatyana’s Wedding Vows’ Trailer Ahead Of Console Release.

News Editor at Fextralife. Yuria is an avid PC gamer and Twitch streamer who enjoys online multi-player games and believes games should have amazing storylines not just great graphics.

View my other posts