Following up on the NBA 2K22 gameplay trailer on Monday, 2K is back with a more in-depth look at what fans can expect from the leading basketball sim this year.

“From the outset, our goal was to create fun and competitive gameplay that ensures NBA 2K22 delivers one of the most authentic sports gaming experiences out there,” said Mike Wang, Gameplay Director at Visual Concepts in a statement. “This year, working with our community, we utilized direct feedback to address some of the key changes they are looking for and deliver a number of new gameplay enhancements that will further elevate the experience in this year’s game.”

Gameplay enhancements in NBA 2K22 stretch across defense, dribbling, shooting, finishing and more. Check out what the 2K team is bringing to this year’s game below.

NOTE: ALL GAMEPLAY INFO BELOW COMES DIRECTLY FROM NBA 2K22 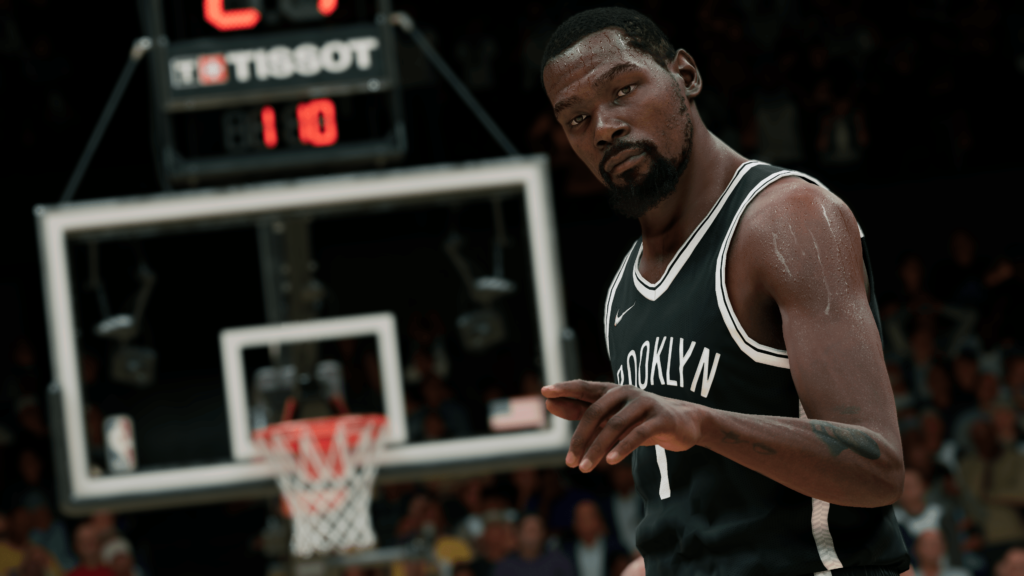 The shot contest and blocking systems were completely rebuilt, leading to several new snatch blocks and volleyball spikes that never happened before. This also paved the way to reward basketball IQ much more in our shooting systems. The shot contest rewrite removed the “ghost contests” that many complained about, and this year being out of position or not getting a hand in the shooter’s face will lead to some easy buckets for the offense. On the other hand, properly crowding shooters with good contests will result in plenty of bricks and airballs, as they should.

For floor defenders, body-up rides and bumps feel much more rewarding as the motion team has dramatically improved the feel of on-ball defensive movement. Unwanted “bump steals” and snatchy body ups have been reduced in favor of giving both the ball handler and on-ball defender more freedom of movement and respected input. Shifts, launches, stops, and cuts all feel much tighter, and with even more new gen foot-planting improvements, you’ll see a lot less sliding on both ends of the floor.

Steals also received an upgrade with a greater emphasis placed on the steal attribute. Low-rated stealers get sluggish animations that punish them when they reach, while high-rated stealers (with good timing and opportunity) will be able to pick pockets at a much higher rate. Also be prepared to see more layup/dunk strips from high-rated stealers when slashers try to force their way to the rim in a crowd.

Defense was also a major focus on the new gen AI front. Da Czar (our resident X’s and O’s expert) and the AI team wanted to create a strong foundation to build on for many years to come. A lot of legacy issues were addressed through complete and thorough rewrites of almost all of the major defensive systems in the game. New on-ball defensive positioning logic gives defenders more consistency in their positioning regardless of their distance from the basket. This enables a much less jittery defender who knows where they want to be in all phases of defensive positioning. This along with motion improvements allowed us to tighten up general defensive positioning, which means gamers will feel more defensive pressure on-ball than was present in last year’s game.

Brand new hedge defender logic and behaviors give the catch hedge defender a specific focus for how they react to the ball handler. In the past, the hedge defender’s primary focus was their man which led to the AI actively abandoning the ball handler. This cascaded into several issues. The ball handler would have an open lane, which in turn would force help to come from the strong side, leaving easy, open jumpers in pick and roll situations. This year, our hedge defender can focus on the ball and play two offensive players intelligently covering the deepest threat. Our drive help was also built from scratch this year to give our AI help defenders more intelligence in their calculations for when to send help on the drive. We also increased help defender logic, controlling movement speeds requested in help situations. The AI will no longer send a defender to double a standing offensive player thirty feet from the basket when a user requests drive help in the defensive settings.

This year marks the most significant update to the fundamental defensive rotations we have ever done! We now have the ability to have both single and double rotations to take away the first or second passing lanes once help defense is triggered. This creates more opportunities for a second or third pass to find the open shooter. We also gave our AI the ability to anticipate certain play actions like floppy or down-screen actions. When the AI properly detects these situations the off-ball defender can now go into what we call, chase behavior. This helps AI defenders take the proper route around screens to put themselves in a better position to navigate and avoid screen contact. This helps with the overall flow and spacing on both sides of the ball. Lastly, we also added a brand new cutter help defensive system. This system helps to fill in defensive gaps and sends help anytime a player has a clear path to the rim. This system can pick up that cutter and send a rotation defender to cover the helper when possible.

Offense will obviously never be neglected in any 2K basketball game, and I’m thrilled with our offering for NBA 2K22! Dribbling is something I personally spend a lot of time working on and am extremely passionate about and can say, without a doubt, that playmakers are going to have a field day with this year’s game! The 1-to-1 Basic Size-ups have been removed and replaced by 1-to-1 Signature Size-ups. But what exactly does that mean? Flicking the Pro Stick in various directions last year gave you fairly generic-looking size-ups, while holding up on the stick gave you a nice-looking mo-capped dribble series. This year, the goal was to marry the two together and give each player a unique feel and rhythm when sizing up, while also giving the gamer complete control over how the series plays out.

KD’s big hesi crosses, Harden’s around/thru the leg moves, Steph’s quick machine gun crosses, and Luka’s methodical rock back and forth dribbles are all now under the gamer’s direct control rather than a preset movie. The speed stick that we introduced on new gen last year also returns. So flicking the stick quickly results in quicker dribbles while slower flicks give you more rhythmic ones. There are around 50 unique signature size-up packages to choose from, each with its own distinct advantages. Make sure to give all of them a try to find out which one best suits the rhythm of how you like to play. Additionally, you can equip one of 32 unique dribble sequences (which I’ve dubbed Signature Combos) as well. These are quick, three or four- second dribble combos that you can trigger by simply holding Sprint and flicking the Pro Stick up. Mixing the Signature Size-ups and Signature Combos together gives you a limitless variety for how you want to break down your defender. 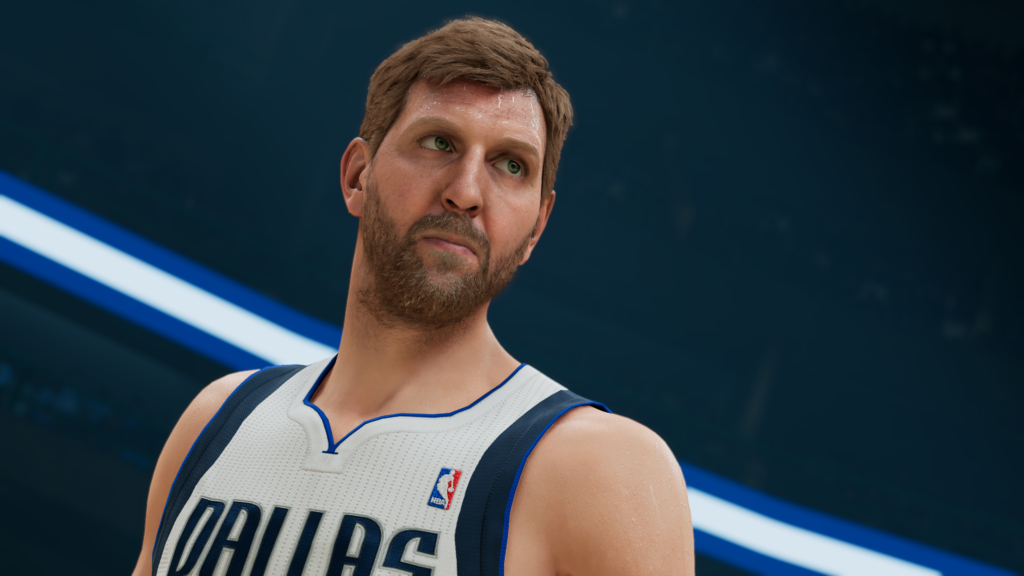 Now a little treat for the bigs. We spent a lot of time upgrading post play with loads of new content, including new movement and a new arsenal of back-to-basket moves. Similar to face-up ball handling, many of the new moves are cancels and aborts. For example, start a post spin by twirling the Pro Stick, then immediately move the left stick in the opposite direction for a spin back. There are also new RT/R2 fakes that keep you engaged in post allowing you to chain multiple fakes together without disengaging. You can also take advantage of new disengage faceup moves, controls to help you avoid steals, new hop shots/fades/hooks, and a better pull chair mechanic. There’s a lot of great combinations and fakes once you’ve mastered the controls.

Shooting has undergone many changes for NBA 2K22. There’s a new shot meter with a dynamically resizing make window. This window will expand when you’re taking high-quality shots with good shooters, but will shrink when heavily contested, shooting with a low-rated shooter, or fatigued. The major emphasis for shooting success this year is Shot IQ. The teams that work for open looks and take smart shots are going to see much more success than the teams that force up bad shots.

It sounds elementary, but it’s something we really keyed on this year as taking quality shots was more or less overshadowed by ratings and stick skills. Shot timing still plays a major role in the skill gap (and yes, you still get an additional boost for turning the meter off), but will only take you so far if you’re taking bad shots. We’ve heavily focus-group tested the new shooting mechanics with players of all skill levels and believe this is the best that shooting has ever felt in NBA 2K.

We also made a strong push to get more of a skill gap into finishing at the rim. As beautiful as our motion-captured dunks are, it was a shame that once you saw one fire off, you basically knew it was an automatic two points. With the revamped blocking system, we’re now giving rim protectors more tools to make great stops at the rim. On top of that, on new gen, we’ve added timing meters to both alley-oop and aggressive skill dunk attempts. When an alley pass is in the air, you’ll need to press the Shot Button at just the right time to finish off the oop. If you’re too early or late, you’ll either smoke the finish or miss the catch completely. (side note: you can force bounce pass alleys this year!)

And on the dunking side, holding Sprint and pulling straight down on the Pro Stick will trigger the aggressive skill dunks. When you have a defender standing underneath the rim, using the aggressive skill dunk feature will let you basically force a dunk attempt on-demand as long as you have a strong dunker and you have a bit of a runway. It’s tough to hit the perfect timing for these high-risk, high-reward plays, but it’s so gratifying when you can pull it off.

We’ve also added dunk celebrations into the game this year that work very similarly to the green release jump shot landing celebrations. So not only can you throw down some nasty dunks in traffic with the new feature, you can now also equip your signature dance to show off a little bit afterward.

You’ll now have the ability to completely customize your dunk repertoire with an all-new Dunk Style Creator! This is a great feature that allows you to have detailed control over the exact style of your dunk packages and lets you equip more dunks on your player than ever before!

What new NBA 2K22 gameplay feature stands out to you the most? Is there anything gameplay-wise that you’re still waiting on? Let us know in the comments. Be sure to stick with Sports Gamers Online for all the latest 2K22 news and more.