People want to see what NBA 2K22 is updating on the gameplay front since 2K has said just about nothing to this point. We know we’re finally getting news in the near future, but I’m mostly chill about the whole situation. Now, that’s partly because I come in with my own set of biases and desires for this year’s game. I’m not looking to be blown away because NBA 2K21 next-gen gameplay was closer to what I wanted than most of the prior 2Ks from the PS4/Xbox One generation. I say that as someone who mostly plays “sim-minded” folks in online leagues rather than random-room 5-out mad men or tons of offline games in MyNBA.

Now, saying I like next-gen gameplay is probably a slightly spicy take, but I say that upfront because I’m not trying to bang out a long wishlist about gameplay fixes I want. Rather, it’s to really key in on one major facet of the game that was simultaneously much better than it had been in the past and much worse: the pick and roll.

The meat of this video has portions that relate to both online and offline gameplay, and I want to make it clear that I’m not saying these pick and roll fixes are  a “simple” wishlist request. The pick and roll is complex and it involves all five defenders and most of the players on offense as well, so it’s a 10-person symphony playing out hundreds of times a game in the real NBA. In other words, this is hard stuff to design and implement.

But I do think if the pick and roll is improved this year in some key ways, a lot of the other issues on defense will sort themselves out to some extent, so let’s get into it.

I think NBA 2K21 next gen had some of the best ball handler vs. on-ball defender interactions ever in the series. There was a difference between good and bad defenders, height and length mattered more, and CPU defense was not OP so it really minimized the concept of calling someone a “coward” or “unsim” or whatever for off-balling a lot of the time. To put it another way, I don’t have much to focus on when it comes to on-ball defensive issues — at least not as a top priority for fixing the pick and roll.

You Can’t Be Half Pregnant 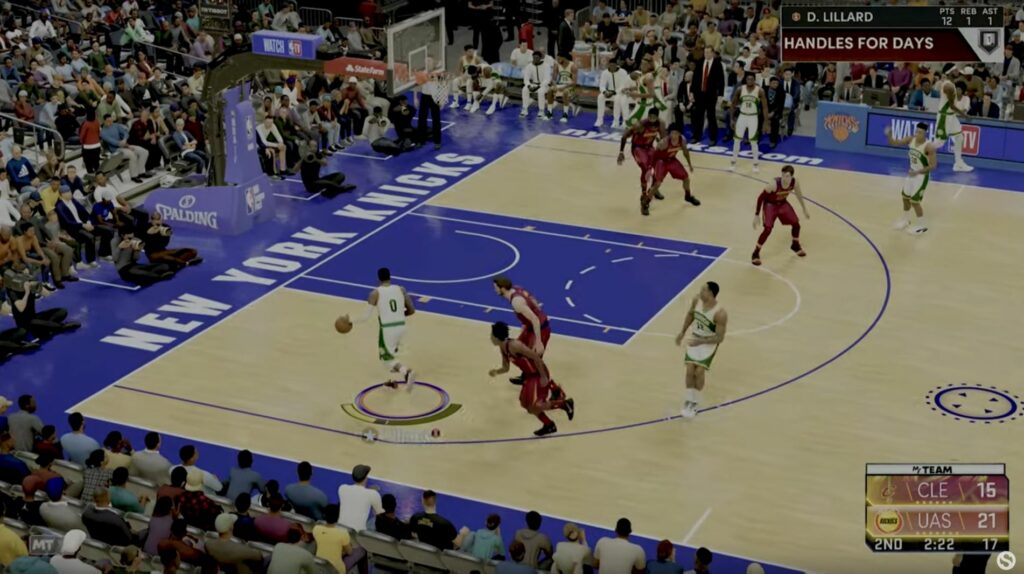 For me, the issues mostly come away from the ball with the help defenders, or at the point of the decision making process of either hedging/trailing//showing or switching the pick and roll. I’ll start with the top culprit, and the one who has to do the job first once the primary defender gets picked, and that’s the big coming up to help out on the pick and roll.

Whether that big defender hedges/shows/traps/or so on, the point is, as they say, you can’t be half pregnant. In short, the CPU big defender too often gets stuck in no man’s land and doesn’t do anything or take anything away.

You can see in some of these video clips that it’s unclear what the big is trying to do a lot of the time. Because the CPU defenders are not mind readers as much anymore, it means they’re not pre-reading you and stopping you. This is a good thing, except it made the pick and roll (especially offline) way too powerful. You didn’t have to earn your buckets because the big would not really take away the drive or 3-ball, or even really the mid range. If the on-ball defender got stuck on the screen at all, the CPU defender was screwed. 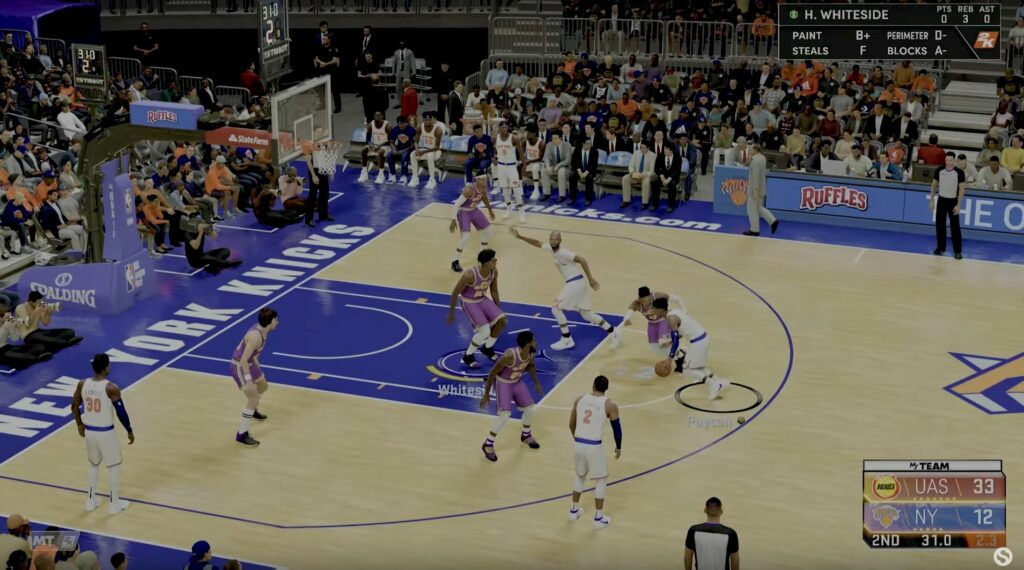 So my first suggestion is to simply have that big play better 2-on-1 defense and zone up the action in a drop coverage. A lot of the time when we switch to the big defender, that’s what we do anyway. We don’t hard hedge or trap, we simply zone up the action and try to take away the oop by bumping the diving roller, and slowing the drive while the on-ball defender trails back into the play or goes under the screen. You’re giving up a decent mid-range shot or a somewhat contested 3-point shot, but you’re trying to stop the points in the paint.

The problem with that for the CPU is most likely that the CPU big is not really coded to zone up two players or bump the roller. It has instructions for who to guard, and then where to be for help or deny defense based on who is being guarded. This is at least one reason why we see big defenders wildly out of place for where they should logically be to help out at the point of attack.

You can even see it with user defenders. Because the game has decided you are guarding a certain player, you can’t properly turn your body and zone up the play some of the time because the game is trying to keep your hips turned towards the player you’re technically covering.

Also, as a side note, yes, it would help if the primary defender didn’t get stuck on as many screens so the big didn’t get put in as many 2-on-1 situations, but that’s a tuning issue as much as anything. 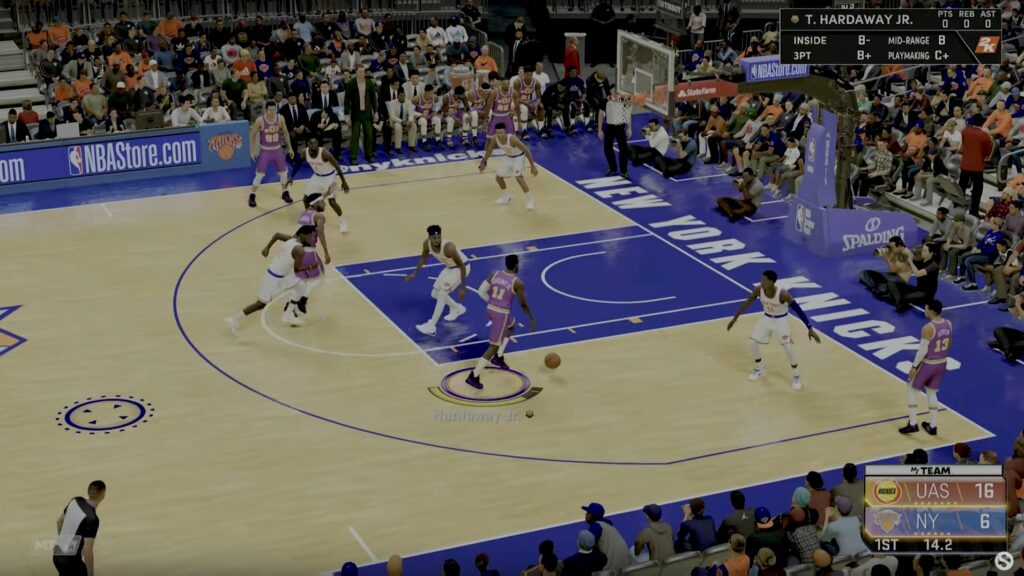 So that’s a key issue to solve, but there’s some secondary issues at play here as well. The first is that bigs and standstill defenders are simply too slow when in their defensive stance. This is a delicate issue because you don’t want to see Brook Lopez being able to recover and slide to get in front of a full-steam ahead Damian Lillard or whoever, but because these CPU guys are not mind reading anymore, they need much better positioning or a little more help in the going 0-to-60 department.

Additionally, I talk a lot about zoning up the 2-on-1 action as the big because hard traps don’t work — double teams legitimately just aren’t a thing in 2K it seems. And we also know historically that hard traps of the pick and roll just don’t work in 2K on a fundamental level because everyone has LeBron James vision. This is due to the camera angle we see the game at, and because pretty much every player has the strength to whip one-handed passes because people complain a lot when they can’t. If you see a pass and want to make it, a lot of people don’t care to understand how fast NBA defenses can move or shut down those passing lanes because, well, video game logic. I’m not saying double teams shouldn’t work in 2K, clearly those need help, but I don’t think it’s the answer to helping pick and roll defense in the best way possible. 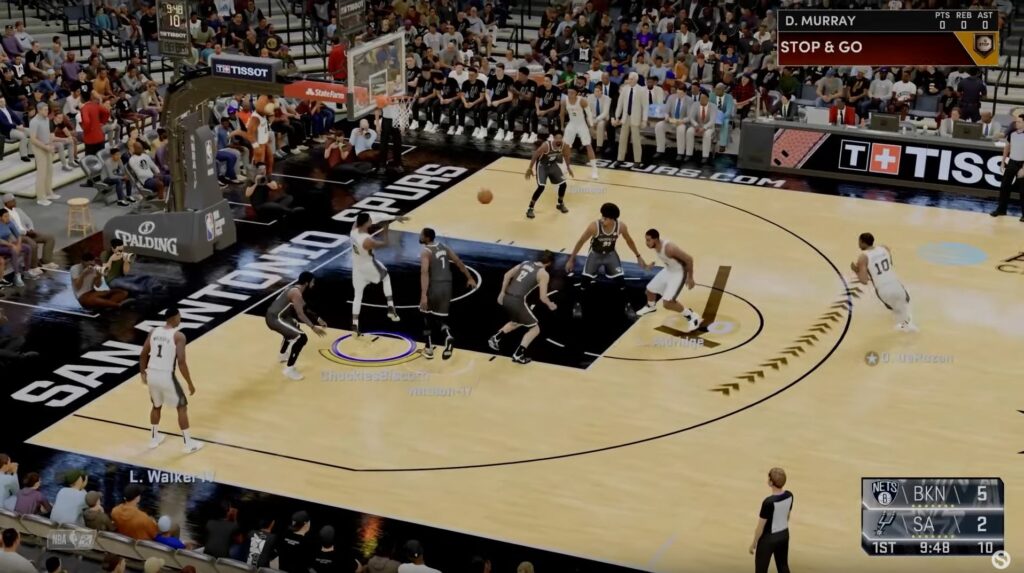 One other issue here with this initial interaction, and this is more specific to offline play, is ACE or whatever does not adapt. The AI does not realize double teaming is useless, and it also does not do enough to try and change up coverages. At best, you just start slipping the big most of the time as the coverage gets more aggressive, and that’s just more easy points.

Beyond the initial pick and roll defensive interaction, backline help defense is obviously the other major component, and this seems like a couple of smaller problems that add up rather than one obvious thing that stands out.

I’ll start with a more intricate pet peeve here at the top, which relates a lot to online games. This footage is provided by my good buddy alabamarob on OS, and it shows that the “Leave Now” and “Pre-Rotate” settings just don’t work for online game-planning purposes, which you can see here. 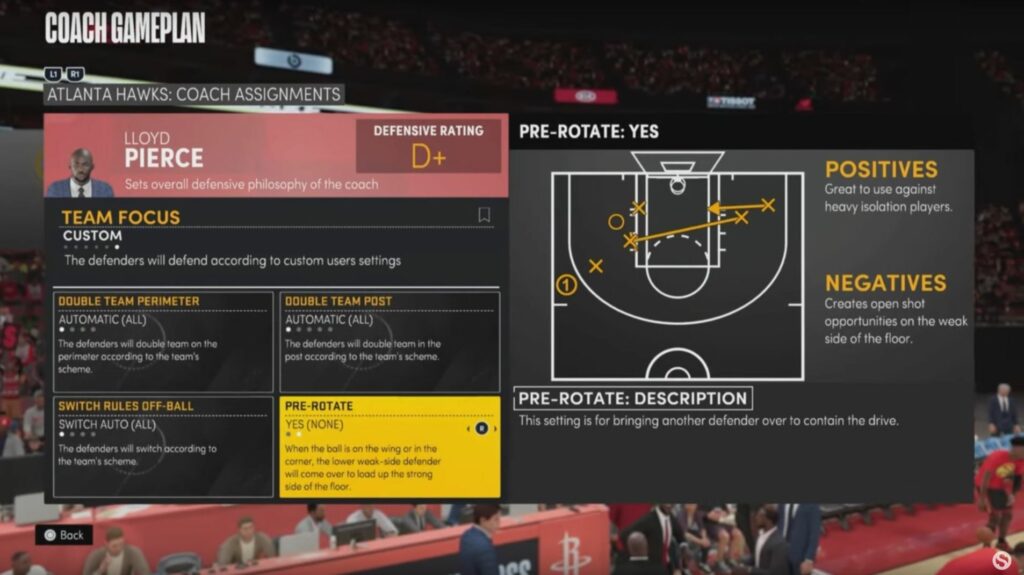 This heavily impacts our ability to create defenses that specifically get designed to halt certain pick and roll actions because we can’t even be that coach who is directing our five defenders.

This is compounded by the next issue, which is that the help defense “button” can’t be trusted. When you press that button, it is not clear what defender will help. Obviously, if we set a player to “leave now” we would logically want that defender to come help, but that’s not always what happens. Instead, sometimes we get a help defender leaving some great shooter in the corner to help.

Beyond that issue, bigs give up straight-line drives too often, and there are not enough contact animations at the rim either, but those things are somewhat secondary to the other issues — and those matter more for stopping 5 out and paint points, which is not the exact point of this video. 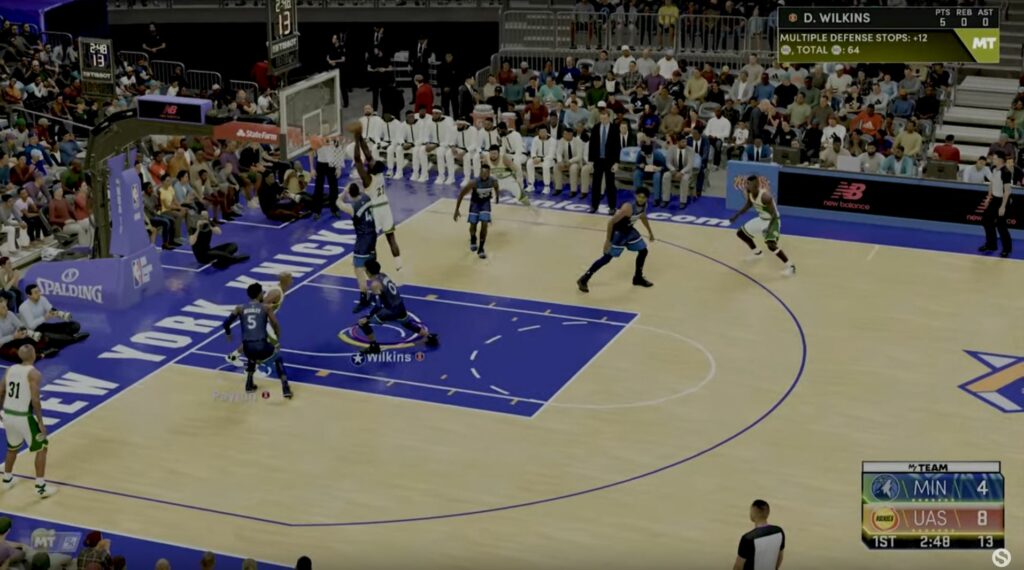 However, off-ball animations are another issue. They don’t exist in some scenarios anymore because 2K seemed to feel that off-ball players doing swim moves and other things to get around screens was pulling defenders way out of position from a team-defense perspective. So, instead, unless these animations get initiated by the off-ball defender, you have a lot of “force field” scenarios where players end up taking these wide turns to get around players. Or they’ll run in place. Ultimately, these outcomes still pull them out of position just like they were before when they were over-animating. In other words, it seems one problem was substituted for another. 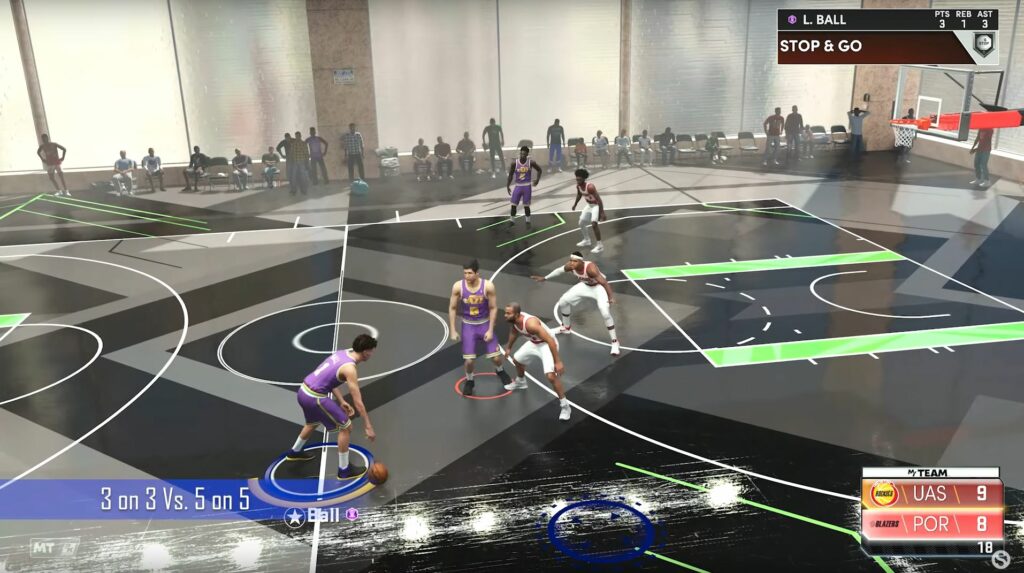 I want to end this with a final observation. I think 2K actually gets pretty close to fixing a lot of these help-the-helper issues in Triple Threat game modes before it then falls apart in 5-on-5 gameplay. I have some clips of the Triple Threat modes here going in the background, and it’s interesting to note how much more sound the defenders seem to be when just needing to focus on 3 players. On top of that, the on-ball defender does seem to deal with the initial screen better a lot of the time, which helps make things easier for the hedging big.

As of now, there is generally a 3 outcomes system to me with pick and rolls:

I care about improving these outcomes before lots of other things on defense because outside of isolation play, the pick and roll is what you’re most likely to see moment to moment. You’re not going to see intricate double-high screens and Terry Stotts fade actions when playing most people, you’re going to see someone press the pick and roll button and try to go to work. 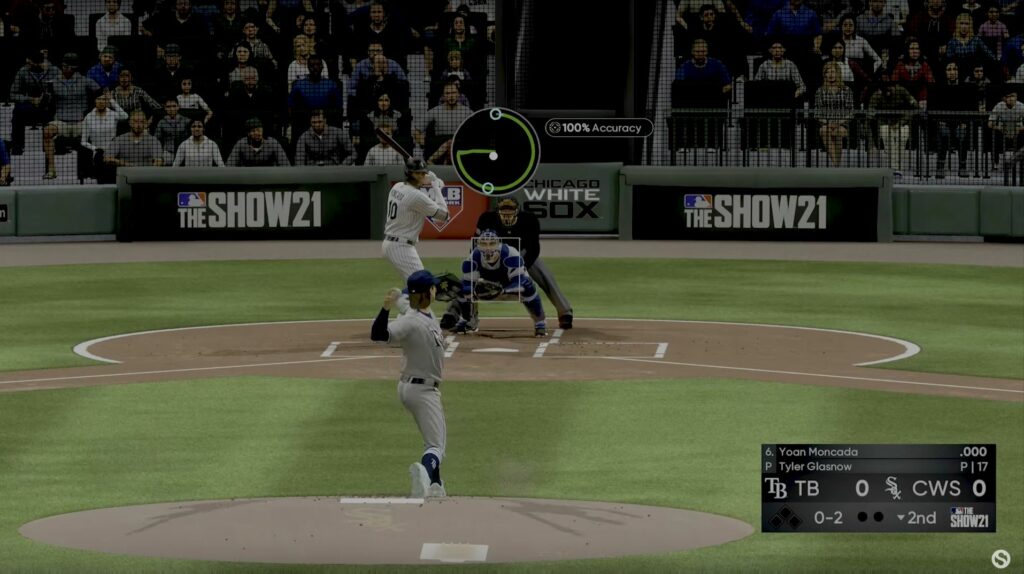 It’s like the pitcher-hitter interaction in MLB The Show. If you don’t nail that aspect, then you don’t have a game in some ways — at least not one that I want to come back to each and every day. So making the pick and roll feel as dynamic as possible to create that chess match is key to making NBA 2K22 a better game on the court.

I want to thank the OS peeps for a lot of this video. All the footage, except the stuff from alabamarob is my own, but we talked so much about pick and roll defense throughout the year in this thread and elsewhere, and it really helped crystallize a lot of things. Those sort of threads are why I continue to love OS, and all the people that contributed to it with videos, sliders, etc. are awesome. We’re going to get gameplay news very soon, and we’ll hope for the best, but I hope we can have similar conversations about the pick and roll again this year, just with hopefully some better outcomes and breakdowns.