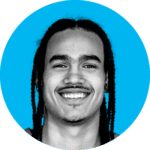 Favourite basketball movie: “Coach Carter. It sets you on the right path. I’ve probably watched it 50 times.”
Non-basketball hero: “My mom, Suzanne. She can’t be broken.”
The best thing about playing for Toronto: “My family comes and cheers me on.”
Greatest sneaker of all time: “Air Force 1s, all white. I have 15 pairs of them.”
Travel essential: “PlayStation 5. I like to play NBA2K in the hotel with my teammate Scottie Barnes.”
Recent splurges: “I’ve been saving—I didn’t know if my contract was going to get renewed at the start of the season.”
Best on-court skill: “Being able to create offence for the other guys.”
If you could steal one skill from another player on the team: “Fred VanVleet’s shooting. He’s cash.”
What motivates you to work out every day: “Longevity. I want a long career, so I’m trying to get healthier every day.”
Favourite local food spot: “Taudo’s in Rexdale. I like the curry goat on rice.”
Go-to outfit: “A white shirt, Air Force 1s and Amiri jeans.”
When I retire from basketball, I will… “Get into investing, like my teammate Thaddeus Young, who has his own portfolio.”
Basketball culture in Toronto is… “Continuing to grow.” 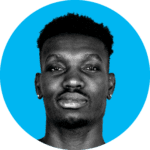 Favourite basketball movie: “Hustle. It shows what we go through as athletes.”
Non-basketball hero: “My mom, Mary. She’s always been there for me.”
The best thing about playing for Toronto: “Being in Canada. My family visits from Montreal to see my games.”
Fondest basketball memory: “The championship parade in 2019.”
Greatest sneaker of all time: “Air Jordan 4s, all white. When I didn’t have money, they were what I wanted.”
Recent splurges: “I just bought a $3-million house near Yorkdale mall. It has a theatre, a game room and a sauna.”
What motivates you to work out every day: “A paycheque. My friends and family count on me. I love basketball. Getting paid for it? That’s even better.”
You’ll consider your NBA career a success if: “It’s already a success. I was homeless in Montreal for two years. I’m not even supposed to be in the league.”
Favourite local food spot: “Akira Back. I love the Wagyu tacos and fried rice.”
When I retire from basketball, I will… “Become a basketball ambassador for kids in Montreal and live in Turks and Caicos.”
Basketball culture in Toronto is… “Everything. You go to other arenas around the world and no city turns up like this one.” 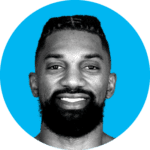 Favourite basketball movie: “He Got Game by Spike Lee. The cast, the music, the story—I just love it.”
Non-basketball hero: “Former UFC fighter Michael Bisping. He won the middleweight championship even though he lost his right eye.”
The best thing about playing for Toronto: “Being Canadian, I get nostalgic for things like the leaves changing.”
Greatest sneaker of all time: “Balenciaga Speed trainers. They slip on like socks.”
Travel essential: “NormaTec boots, which increase blood flow and circulation to help me recover.”
Recent splurges: “Airpods. I just forgot my headphones in Victoria.”
If you could steal one skill from another player on the team: “Fred’s shooting. He just makes tough, long shots.”
What motivates you to work out every day: “My three-year-old daughter, Ari. I want her to have a good life.”
You’ll consider your NBA career a success if: “I play 10 years in the league. I think the average career is four years.”
When I retire from basketball, I will… “Drop off the face of the earth. I’ll probably move to an island somewhere.”
Basketball culture in Toronto is… “On the rise. There’s so much talent that I can’t keep track.”